It's pretty clear by now that the old MMO subscription model is not viable for most games. Back in the day (say, 2004), there were only a few games to choose from. They charged about $50 to get started, and $15 or so per month thereafter. That was a lot of money to try out a game you've never played before, but with such limited competition, what choice did you have?

These days, there are bunches of online multiplayer games, and with greatly increased competition, something had to give. Just as before, a few games could get away with the subscription model -- the biggest, most life-consuming, all-things-to-all-people games like World of Warcraft. There is enough to do in WoW that many who pay the subscription don't play any other games. But not every game is as big as WoW, and these smaller games need a different model -- free to play. 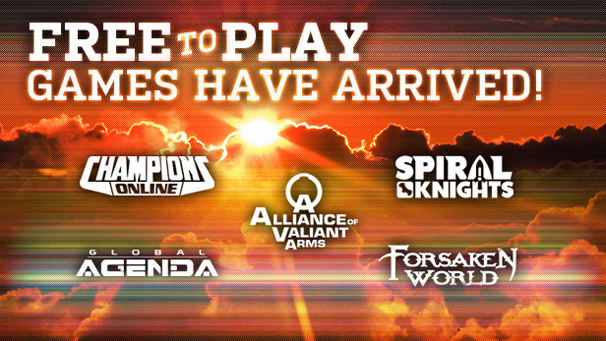 Of course "free to play" doesn't mean you can't pay; it just means you can play "some" before paying. And that's about all you can say in terms of a clear definition of free-to-play; there are enormous numbers of variants of the model, and the industry is actively experimenting with new ones all the time. Someday there may be some convergence, but we haven't hit that point yet.

Alex Carobus and I had great success with free to play on Realm of the Mad God. We let everyone play the whole game for free, but we gave our most fervent fans the ability to pay us as much as they wanted for extra storage space, extra character slots, clothing, pets and more. We were not comfortable with selling outright game advantage, but we also wanted to avoid the commonly seen model of making the game painful and annoying until the player ponies up some cash.

Jetbolt's new MMO will use the free-to-play model. I'm not sure yet what types of things players will be able to buy, but my goal is to strike a balance between fun for everyone and the ability of true fans to spend as much as they like on their gaming hobby.